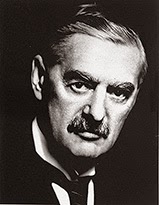 Those on the left never learn anything from history. On September 30, 1938, British Prime Minister Neville Chamberlain signed the Munich Agreement with Adolph Hitler, Chancellor of NAZI (National Socialist Party) Germany ceding an area in Czechoslovakia they designated the Sudetenland. Czechoslovakia was not a party to the negotiations. After betraying Czechoslovakia, Chamberlain flew back to London, and in triumph he proclaimed "My good friends this is the second time in our history that there has come back from Germany to Downing Street peace with honor. I believe it is peace in our time."

What Chamberlain really achieved, however, through his betrayal and appeasement, was the foundation for the worst war in the history of the world, World War II. Appeasement and excusing territorial expansion through the use of military force, always leads to war. And, if it does not lead to war, it leads to slavery.

Several years earlier, Putin had engineered the election of a pro-Russian Ukrainian President, Viktor Yanukovych. This was after the previous Ukrainian President, Viktor Yushchenko was poisoned. While it has not been confirmed, it appears that President Yushchenko was poisoned by the Russians. Since Putin is the former head of the KGB under the old Soviet Union, it is not inconceivable that he personally orchestrated the poisoning of Yushchenko.

The election of Yanukovych led to great protests as the new, pro-Russian President, began to tie Ukraine more closely to Russia, instead of to NATO and Western Europe as the people desired. The Ukrainian people have not forgotten the intentional starvation of more than 20 million Ukrainians by Soviet dictator, Joseph Stalin. Finally, Yanukovych was driven from office. When that happened, Putin realized that his grip over Ukraine was slipping away.

Vladimir Putin took stock of the resolve of the West, especially the President of the United States, Barack Obama. After seeing Obama’s unwillingness to take action in Syria, his timidity in dealing with Iran, and his soft approach to North Korea, Putin acted decisively.

Using the same pretext as Hitler used to invade Poland in 1939, Putin launched an invasion of the Crimean region of Ukraine. Facing little or no resistance, Russia annexed Crimea quickly, thus initiating the beginning the reconstitution of the old Soviet Union. Crimea provides Putin with important military ports on the Black Sea and other economic advantages.

As I write this, Russian troops are massed on the border of what remains of Ukraine. It is not hard to imagine what is coming. I suspect it will play out similar to what happened in Poland just prior to World War II.

On September 1, 1939, just one week after Germany signed a nonaggression pact with the Soviet Union, Germany attacked Poland from the West. Then on September 17, of the same year, the Soviet Union attacked Poland from the East. By October 6, Poland was defeated, and Adolph Hitler and Joseph Stalin had divided up Poland, with each taking roughly half.

The laughable pretext for the invasion of Poland by NAZI Germany was that Poland had actually attacked Germany. When visiting Poland a couple of year ago, my wife, Kathi, and I took a guided tour of Gdansk. The tour was led by a young man who grew up in Soviet controlled Poland. His parents and his grandfather were ardent fans of Ronald Reagan, and this young man gave total credit to President Reagan and Pope John Paul for the defeat of the Soviet Union. And, even though his family had suffered much from the time Poland was captured by Hitler and Stalin, he had maintained his sense of humor. He shared this quip with us, “We Poles say that it is God’s little joke that he located Poland between Germany and Russia.”

After Putin annexed Crimea, there was much huffing and puffing by the White House. Secretary of State, John Kerry, intoned something to the effect that this is totally inappropriate in the 21st Century. Like Obama, Kerry talks like a college professor who lives in an alternate world. They talk about what should be, not what is. For quite some time President Obama said that he refused to recognize Russia’s occupation of Crimea, whatever that means.

It was the Obama administration, led by Secretary of State Hillary Clinton, that announced that they had pushed the “reset button” in relations with Russia. You see, in the eyes of liberals like Obama, Clinton, and Kerry, it is the United States that has been the number one cause of problems in the world. All throughout the Cold War, liberals wrote articles and gave speeches drawing a moral equivalence between the United States and the Soviet Union. In their eyes, the United States was no less responsible for tensions between the two superpowers than was the Soviet Union. If only America would be more understanding and more conciliatory, we could solve our problems, they said.

Liberals were totally opposed to the arms buildup under President Ronald Reagan. They said that it only increased tensions with the Soviet Union. They even opposed defensive missiles on the grounds that to install such missiles was an act of aggression that would encourage a nuclear attack by the Soviets. In his second term, Ronald Reagan met with Soviet Premier Mikhail Gorbachev in Reykjavík, Iceland to negotiate an arms treaty. Gorbachev insisted that Reagan abandon his Strategic Defense Initiative (SDI) which the American left derisively called “Star Wars.” When Ronald Reagan refused to do so, Gorbachev refused to sign the arms reduction treaty. The news media, the Democratic Party, and leftists of all shades were outraged that Reagan would not abandon the Strategic Defense Initiative (SDI) and sign the treaty. They said that Reagan failed at Reykjavík, that he missed a wonderful opportunity to reduce the chance of war. They could not have been more wrong. Reagan knew that having the upper hand was the only way to bring down the Soviet Union and free the people held captive by that ruthless police state. The Soviet Union was, as Ronald Reagan said, “an evil empire.” It was a description that the left hated and derided.

Mikhail Gorbachev later wrote that it was when Ronald Reagan refused to abandon SDI that he knew that the end of the Soviet Union was inevitable. While the American left believes in peace through weakness, the real path to peace is through strength, as Ronald Reagan understood.

During his second term in office, George Bush signed an agreement with Poland agreeing to install an anti-missile defense in that nation. One headline blared, “Will Bush ignite another Cold War with Russia by placing missiles in Poland?”

But, when Barack Obama took office he scrapped that agreement and refused to install the missile defense system in Poland because Russia opposed it. It was part and parcel of his hitting the reset button with Russia. It was the beginning of his efforts to appease Russia and encourage the bear to be friendly. Today, Eastern Europe is reaping the whirlwind of Obama’s reset of relations with Russia. Obama’s goal is to reduce American power, and he has gone far in accomplishing that goal.

And yet, we are still the only superpower in the world, but this Administration is embarrassed that we are. They refuse to project our power to discourage tyrants like Putin. The United States has the power to economically cripple Russia by signing an agreement to sell natural gas to Western Europe and opening up federal lands to fracking. Today, Germany, France, et. al. are held captive by the natural gas and oil they depend on from Russia. By simply eliminating this threat, we free up Western Europe to join us in financially crippling Russia.

But, we should not presume that economic austerity alone will deter Russia from taking all of Ukraine, Estonia, Latvia, and the other nations that were enslaved by the old Soviet Union. After all, the old Soviet dictators were satisfied as long as they remained in power to have their citizens live in economic misery. Why should we think that Putin is any different? Now is the time to reinstate of our agreement with Poland to install missiles in that nation and any other nation that seeks to deter Russian aggression. In addition, we should agree to sell advanced military weaponry to Ukraine and all other friendly nations in Eastern Europe.

Like everyone else in the United States I am weary of war. However, I do not believe it is necessary to go to war to deter Russian aggression. By signing mutual defense treaties, enlarging NATO, providing arms, and using every means at our disposal to economically cripple Russia, we have the opportunity to not only stop Russian aggression, but also encourage the downfall of Putin in Russia. The Russian people have no desire to fall under the grip of Putin the dictator. He is corrupt, dangerous, and evil.

In fact, it is the misunderstanding of human nature that is at the heart of all the miscalculations and misguided policies of the left. Liberals have told me that they believe they are an elite group and that they have achieved an ethical plane that is above the common man. They don’t believe that man is by nature evil as the Bible teaches. They believe that they have risen above that description and that they can lead others to a higher ethical level if only given the chance. That’s where the term progressive comes from—meaning progress to a higher ethical level. It was this false belief that led our first progressive President, Woodrow Wilson, to re-segregate the South because, in his view, African Americans had not yet reached the necessary ethical plane to work, go to school, and live alongside white Americans. And, it is this misunderstanding of human nature that results in all sorts of mischief by liberal politicians. If people would just act like they should, we could create a nearly utopian society, they say.

But, alas human nature is corrupt and will always be so. It was this understanding by our Founders that led them to create checks and balances in our government, keeping any one man or group of men from having too much power. Sadly, liberals don’t live in in the real world, they live in their own mythical world. Because of this, they have led our nation into war, they have created monstrous schemes that reduce individual freedom, they have ensnared the poor in permanent poverty, and they have rejected traditional moral values. Liberals and their policies are dangerous. Nothing ever changes.
Posted by Bruce W. Eberle at 1:36 PM No comments: