Who Are the Extremists?

USA Today is the largest circulation newspaper in the United States.  Some say it is to newspapers what McDonalds is to a sit-down restaurant—fast, but sometimes hard to digest.  It is the ubiquitous newspaper found in every hotel and motel across the US.  It is found on newsstands everywhere.  The folks at Gannett like to think of it as America's newspaper, slightly to the left, but not extreme.  I'll let you judge for yourself…

The March 1-3, weekend edition of USA Today featured this above-the-fold lead story—Why You Should Sweat Climate Change.  Here are a few excerpts from that story…

"More American children are getting asthma and allergies, and more seniors are suffering heat strokes."

"…these scenes are already playing out somewhere in the United States, and they're expected to get worse in the years ahead.  In fact, a remaking of America is likely in our lifetimes…This will transform how and where we live, work and play."

"Massachusetts' climate will start to look more like North Carolina's, and Illinois will begin to feel like Texas.  Montana's Glacier National Park…will likely lose its glaciers."

"Scientific research shows that [climate change is] increasing the risk and intensity of heat waves, downpours, drought and wildfires."

"Some may still deny the overwhelming judgment of science, but none can ignore the devastating impact of raging fires and crippling drought and more powerful storms."

This is pretty overheated, emotional stuff.  Is the sky falling?  Is the end near?  Are we truly facing cataclysmic changes to our climate that will alter our lives and that of our grandchildren?  Are you and I to blame for driving cars, using energy, and indeed breathing out carbon dioxide?  Must we sacrifice the poor around the globe on the altar of global warming?  Must we stop using fossil fuels, reduce our lifestyle, learn to live with less?

Are the poor to be sentenced to permanent poverty and be denied economic prosperity because we must stop global warming?  Inexpensive, easily accessible energy is the key to building a prosperous society.  The more accessible energy is, the less expensive it is, the faster a society moves up the ladder of prosperity.  Cheap and accessible energy means a higher standard of living, greater access to food, higher per capita wealth, and the ability to educate and train men and women to work in better paying jobs.

I'm sure the President believes in global warming just as much as do the editors of USA Today, but do the facts back them up?  In other words, is the US experiencing increased wildfires, greater droughts, and more massive storms?

Let's use the official statistics provided by the United States government to see if the emotional rhetoric and alarmist language of the President and the USA Today editors is backed up by the facts.

Are wildfires on the increase?  Not according to the government's own figures.  The graph below shows that since the 1960s the number of wildfires is actually decreasing. 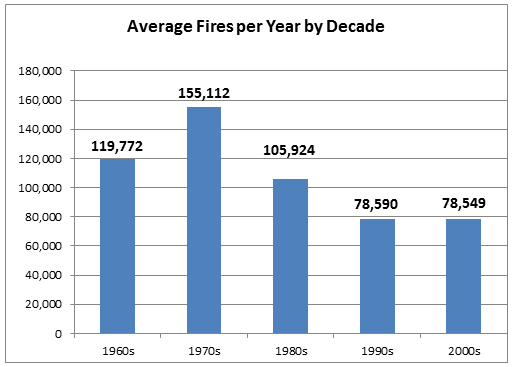 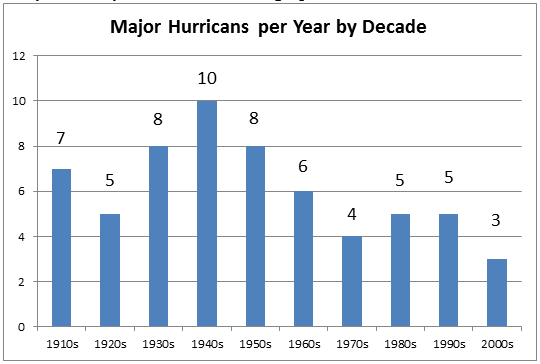 But, what about droughts?  Is the United States suffering from more droughts of greater severity than ever before?  Sorry, but that's strike three for the global warming alarmists.  The fact is, according to Wikipedia (that uses government data)…

"Over the contiguous United States, total annual precipitation increased at an average rate of 6.1 percent since 1900…"

So, to sum it up, neither USA Today, nor President Obama is right, no matter how insistent they are or how extreme their language.  The number of wildfires is on the decline in the US, the number of major hurricanes is on the decline, and annual precipitation is on the increase.  Moreover, there is no scientific evidence that glaciers are melting, only non-verified reports from hikers.  In fact, with few exceptions, scientists verify that glaciers are growing in India, in Norway, in the US, in Antarctica, in Greenland and in the Artic.  Snowfall is increasing as the earth continues to cool over the past decade.  Yes, you heard me right, the earth is currently in a cooling cycle.

The extremists who have a political and financial stake in global warming are in a panic and their rhetoric reflects it.  This cooling cycle has run counter to the catastrophic models upon which the theory of man-caused global warming is based.  In fact, many true scientists believe that the earth is entering into a long period of global cooling, not global warming, as it has in the past.  Data confirms that the earth has gone through long periods of warming.  In fact, Dr. Sallie Baliunas, an astrophysicist with the Harvard-Smithsonian Center for Astrophysics, and one of the nation's leading experts on global climate change, believes that we may be nearing the end of a solar warming cycle.  Baliunas says there is a strong possibility that the Earth will start cooling off in the early part of the 21st century.

According to Contributing Editor, James Taylor, writing in Forbes magazine…

"Only 36 percent of geoscientists and engineers believe that humans are creating a global warming crisis, according to a survey reported in the peer-reviewed Organization Studies.  By contrast, a strong majority of the 1,077 respondents believe that nature is the primary cause of recent global warming and/or that future global warming will not be a very serious problem.

So let's stop the doomsday rhetoric.  Let's stick with the facts and let's rely on true science.  We know the much touted "hockey stick" graph supposedly validating global warming was concocted by falsifying the data.  Science is reliable, it doesn't need to be falsified or manipulated to arrive at the truth.

Many politicians are wedded to global warming as a political tool for expanding government power and control over our lives.  Americans rejected socialism as did much of the world just a few years ago.  So, the left tried a back door approach.  They created and/or imagined a mythical climate crisis so that they could impose government power over our lives.

President Obama is not a scientist, nor are the writers at USA Today.  They have just been conned by pseudo scientists and political scientists who have a political, not a scientific agenda.  After all, hundreds, if not thousands of otherwise objective scientists are on the government dole, receiving millions of dollars in grants to promote man-caused global warming.  They are hardly objective observers because they have skin in the game.

Let's hope that soon we can put this nonsense behind us and quit wasting hard earned tax dollars on another hair brained pseudo crisis invented by the left.