There is a new book out by Jonathan Alter by the title, The Center Holds:  Obama and his Enemies.  This book tells the story of the 2012 election from the perspective of someone hailed by The Washington Post as, “One of America’s most highly respected political journalists…”  The promo on the book begins this way… 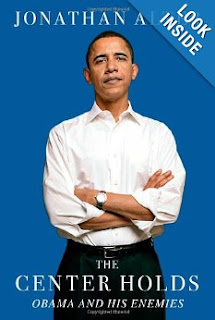 “The election of 2012 will be remembered as a hinge of history.  With huge victories in the 2010 midterm elections the Republican Party had blocked President Obama at every turn and made plans to wrench the country sharply to the right.  2012 offered the GOP a clear shot at controlling all three branches of government and repealing much of the social contract dating back to the New Deal.  Facing free-spending billionaires, Fox News, and a concerted effort in 19 states to tilt the election by suppressing Democratic votes, Obama repelled the assault and navigated the nation back to the center.”

When I first read the promo information printed above I was a bit incredulous.  I realize that when you have an ideology, right or left, your perspective is quite different, but I must admit that I was surprised that Alter places Barack Obama in the center of the political spectrum.  It’s not that all politicians don’t attempt to characterize their positions as centrist, but rather that Obama has unabashedly characterized his intent and his ideology as from the left.  His hero was Saul Alinsky, who dedicated his book, Rules for Radicals, to Satan.  Since Alinsky was not known for his humor, I think it is fair to assume that his book dedication was serious.  Rules for Radicals is, of course, the book that young Barack Obama read and then taught while some sort of an assistant college professor.  He was and is committed to the philosophy of Saul Alinsky.

What does Alinsky’s book, Rules for Radicals, have to say about ethics?  Essentially the message is to do whatever you have to do to achieve the ends you desire.  Always tell audiences what they want hear, but do what you want to do.  Here is a direct quote taken from Rules for Radicals…

“…you do what you can with what you have and clothe it in moral arguments. …the essence of Lenin’s speeches during this period was ‘They have the guns and therefore we are for peace and for reformation through the ballot.  When we have the guns then it will be through the bullet.’  And it was.” — P.36-37

Saul Alinsky is the man Hillary Clinton worked for.  This is the man Obama reveres.  It so happens that Saul Alinsky spoke on my college campus when I was in school.  He was a far left radical through and through.  He had no ethical or moral principles.  He had no love for America.  He was as cynical, scheming and potentially bloodthirsty as his hero, Vladimir Lenin.  His goal was nothing less than the overthrow of our nation as it was created by the Founders, men whom he openly detested.

That’s why I found it hard to believe that Jonathan Alter would suggest that the views of President Obama are centrist.  Nevertheless, it brings up a good question:  What is the political center of the United States?  Is it defined by winning an election?  In other words, if you win an election in some overwhelming fashion, does that mean you are now the political center?  That seems to be the assertion of Alter’s book, but it’s not totally clear.  Is he saying that his electoral victory defined Obama as holding center ground?  Or is he is saying that the policies and ideas of the Obama presidency were the center and that they succeeded in carrying the day when the votes were tabulated?  Let’s look at the idea that by winning an election you define the political center.

It is true that President Obama won two consecutive elections, both by relatively narrow margins (52.9% of the 2008 vote and 51.1% in 2012).  It was a comfortable margin, but certainly not a landslide of the proportions won by Ronald Reagan in two successive elections (55.3% of the 1980 total vote for both Reagan and Carter; 58.8% of the total vote cast in 1984).  Moreover, while Obama was winning the White House, the Democrats lost ground in races for governor, and made virtually no headway whatsoever in recapturing control of the US House of Representatives or making gains in state legislatures.

In contrast, Ronald Reagan had strong coattails.  His 1980 election swept the Republicans to power in the US Senate for the first time in nearly 30 years.  More recently, the 2010 election was a stunning repudiation of the policies of the Obama Presidency, especially the strong-arm passage of Obamacare.  In 2010 the GOP not only won control of the US House of Representatives, but also flipped control of more than a dozen state legislatures, and turned over seats in local elections that had been held by the Democrats since the election of Franklin D. Roosevelt in 1932.  The 2010 election was truly a watershed election.

Now that we have put a few facts on the table, let’s get back to the Jonathan Alter thesis that Obama policies and the Obama presidency in particular hold the center political ground in America today.  The first thought that comes to mind is; if Obama represents the political center, who is to his left?  The Unabomber is locked up.  Joseph Stalin is dead.  Hugo Chavez is pushing up daisies.  Joking aside, it is hard to imagine any American politician to the left of Barack Obama.

This brings us back to the original question; does winning a national election define the political center of the United States?  Clearly, that is not the case.  If it were the case, it would mean that the center gyrated from Barack Obama in 2008 to the Tea Party in 2010 and back to Barack Obama in 2012.  Alter’s thesis sounds more like wishful thinking than any sort of astute political analysis.

The review of the Alter book in the mainstream press says a lot more about the bias of those publications, than it does about political and philosophical reality.  Here is what those reviewers said…

I have not, of course, read the book.  And, the book may contain some very interesting and informative information, but I do take issue with the implications of the title.  It seems a little silly to me to assert that the most leftwing President in history now occupies the political center of our nation.  Yikes!

Of course, those principles are open to interpretation.  Strong, honest disagreements can and will take place as to what the Founders intended.  The Founders themselves vigorously disagreed with each other.  One of the leaders of the American Revolution who played a critical role in securing victory over the British, Patrick Henry, opposed ratification of the United States Constitution.  Many other vehement arguments took place between the various Founders.  But, an honest disagreement over the interpretation of founding principles is far, far different than advocating a complete change in principles.  Appreciating the wisdom of the Founders is radically different that rejecting and denigrating those principles.

Using the ideals and principles of the Founders as a yardstick to identify the legitimate political center of the United States is not as difficult as it might seem to be.  The Founders were learned men.  They were well educated and well-read.  And, while they disagreed strongly on a number of issues, there were a number of vitally important principles upon which there was near universal agreement.

Among those principles that gained universal or near universal agreement were…

While this list is not necessarily comprehensive, there is nothing in the Declaration of Independence, the United States Constitution, the Federalist Papers, or the writings of the Founders that is in conflict with the statements listed above.  Yes, the Founders disagreed on the precise form of government, how much centralization of government was necessary, but none would disagree with the foundational principles listed above.

If, indeed, the Founders are the political center of our nation, who is closest to this political center, the followers of Saul Alinsky or those in the Tea Party who advocate a return to Constitutional principles?