The Virginia off, off year election was a thud.  The left can’t crow because their guy barely squeaked through after reputedly spending more than $30 million to buy a four year stay in the Governor’s mansion, and the right can’t crow because their guy lost.  The only winners were the folks selling advertising and they won big.  The bad news is that Virginia just elected a modern day Huey Long, the long departed colorful, yet infamous governor of the great state of Louisiana.  If you are not familiar with the antics of Huey and his brother Earl, I recommend you read a little bit about him.  Like Terry McAuliffe, the Governor elect of Virginia, Huey Long was a shameless self-promoter.  The Long and McAuliffe view of government is as a source of power and personal enrichment.

I had the opportunity in late 1970 to give a speech on the campus of Louisiana State University (LSU).  I was living at the time in Port Arthur, Texas, so it wasn’t a long drive to Baton Rouge, where LSU is located.  I was driving there after work on a Friday, so I stopped for dinner along the way.  For some reason I had an opportunity to glance through some post cards and was intrigued by the fact that while Governor Ronald Reagan had to move out of the California Governor’s mansion because it had become a dangerous fire trap, the State of Louisiana had had three Governor’s mansions since the 1930s.  I thought it ironic that wealthy and prosperous California had not replaced its old Governor’s mansion that was built in 1877, yet Louisiana had three different Governor’s mansions in a period of less than 50 years.  It sounded like there must be a story behind these three executive residences in Louisiana, and there was.

Huey Long had accumulated nearly absolute power as the Governor of Louisiana.  He hired and fired at will and he continued to run the state even after he was elected to the United States Senate.  Huey successfully maneuvered his puppet, Oscar K. Allen, into the Governor’s chair.  There is a well-known apocryphal story that Allen was such a willing stooge of Long that one day a leaf floated through an open window and he picked it up and signed it.

Huey Long was just one of many in a long line of corrupt Louisiana politicians.  It was not too many years ago that Louisiana Governor, Edwin Edwards, proclaimed “Laissez Les Bon Temps Roulez!” (Let the Good Times Roll!).  This has potential as the theme of the new McAuliffe administration.

In addition to being self-serving, Long and McAuliffe have many other traits in common.  Long was not above using State of Louisiana funds to politically benefit himself.  One of his favorite tricks was to pave a highway half way to another town and then tell the citizens that he wanted to pave it the entire way, but he was blocked by the state legislature.

Like Long, McAuliffe has used tax dollars to benefit himself and his cronies.  It was McAuliffe who came up with the scheme of selling a night in the Lincoln Bedroom at the White House during the Clinton Administration to raise funds for the re-election campaign.  Selling passports also became a specialty of McAuliffe, who is still under investigation for other shenanigans.  Huey would have applauded.

And, like Huey Long, McAuliffe is a man of the left.  During my trip to Baton Rouge many years ago, I had the opportunity to meet and talk with the grandmother of a friend who lived there.  Up in her eighties, she was a delightful person.  She told me lots of personal stories about Huey Long and about the grand celebration that was Huey’s funeral.  It was quite an affair.  The silver-tongued racist, Gerald L. K. Smith gave the funeral oration.  Smith was a leader of Long’s Share Our Wealth redistribution program that sought to tax and spend more to benefit the poor.  Of course, Huey and his cronies would not suffer financially either.  It was estimated that more than 100,000 people attended Huey’s funeral.  The elderly lady I meet in Baton Rouge said that she was there as a little girl, selling flowers.  She attested to the fact that it was more like a holiday celebration, than a funeral service.

Huey was gunned down in the State Capitol Building.  To this day they are not sure who it was that shot him.  A physician, Dr. Carl Weiss, certainly tried to kill Huey that day, but when he pulled out his gun, Huey’s body guards unleashed a fusillade of bullets that ricocheted off the marble walls inside of the Capitol building.  It may well have been these bullets that actually killed then Senator Huey Long.

Long was a demagogue among demagogues and, his funeral service reflected it.  He was buried right on the Capitol grounds, in front of the new state Capitol building.  Fittingly, carved on the side of the monument are images of rogues such as Earl Browder, an official of the Communist Party USA. 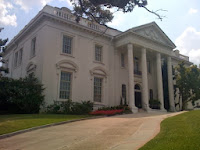 Now about those three Governor’s mansions.  The first one was built in 1887 and was used until 1929.  Huey planned on becoming President of the United States (no doubt McAuliffe has the same ambition).  Huey had his eyes set on running against fellow Democrat Franklin D. Roosevelt in 1936.  When the legislature would not appropriate funds to build a new Governor’s mansion, Huey simply had it demolished.  The legislature then had no other choice but to build a new one and Huey designed it to look just like the White House.  He did it he said to get the feel of what it was going to be like living in the White House.  Please look at the picture at right and decide for yourself if Huey was successful in his attempt to build a model of the White House.

And, for the record, this Governor’s mansion was abandoned in 1963 for yet another Governor’s mansion built (with taxpayer funds, of course) by then governor  by Jimmie Davis, former country and western singer and the first Governor since Huey Long without any ties to the Long family.

So, let’s get back to the 21st Century Huey Long, i.e. Terry McAuliffe.  McAuliffe is best known as Bill Clinton’s bag man.  Like Long, with McAuliffe, politics and money always come first.  In fact, in his book, What a Party! he recounts a startling story.  It seems that McAuliffe is taking his wife and new baby home from the hospital, but he makes a stop along the way.  This is what he says in his book…

“Dorothy [Terry’s wife] was starting to well up in the backseat.  She was having trouble understanding how I could be taking my wife and newborn baby to a fund-raiser on our way home from the hospital.  We got to the dinner and by then Dorothy was in tears, and I left her with Justin [Terry’s aide] and went inside.  Little Peter was sleeping peacefully and Dorothy just sat there and poor Justin didn't say a word.  He was mortified.  I was inside maybe fifteen minutes, said a few nice things about Marty [President of the United Association of Plumbers and Pipefitters who were hosting a Sons of Italy dinner], and hurried back out to the car.  I felt bad for Dorothy, but it was a million bucks for the Democratic Party and by the time we got home and the kids had their new little brother in their arms, Dorothy was all smiles and we were one big happy family again.  Nobody ever said life with me was easy.”


That may have been unbelievable, but the story he tells about when his wife was in labor with another child is no better…

“We got there a little after noon and spent the whole afternoon in her room.  I was trying hard not to appear restless, but I am not one to sit still for long and soon I was going stir-crazy, which drove Dorothy nuts. 'Isn't there something you need to do?' she finally said.  I told her The Washington Post was having a party that evening for Lloyd Grove, who wrote the 'Reliable Source' column. 'Go!' she said. 'You're like a caged animal here.  I'll call you if I need you.'  I went flying out the door and drove to the party.  I kept calling Dorothy to make sure she was fine.  I made the rounds at the party and ran into Marjorie Williams, who was writing a story on me for Vanity Fair Magazine.  She was shocked to see me at the party.  'Isn't Dorothy having a baby today?' she asked.  'That's right,' I said, 'but she threw me out of the room.'  Marjorie just couldn't understand how I left Dorothy alone.  I almost told her about the night I was born and how my mother wanted my father to stay at home to watch Thirty Seconds Over Tokyo, but decided against it.  I went back to the hospital after the Washington Post party and at 3:33 A.M. little Sarah Swann McAuliffe was born.”


What a creep!  Virginia didn’t just elect a Huey Long as its next Governor, we elected a creepy Huey Long.  And, let’s not forget that both Long and McAuliffe are from the party that brags about their compassion and caring.

So, what can we expect of Governor Terry McAuliffe (shown at right in an Edwin Edwards moment)?  Fortunately, the people re-elected a strong majority of Republicans to the Virginia House of Delegates, and they may yet retain control of the State Senate.  If the Republicans remain strong, they should be able to limit the damage of the McAuliffe administration.  But, there will be damage.  There will be new rules and regulations, there will be new taxes, and there will a loss of jobs.  Thomas Jefferson, the second Governor of Virginia said, “The government you elect is government you deserve.”